Musings of a mathematician and aspiring programmer

I am proud to announce that my first computer science paper has been accepted to MFPS XXVIII! In this post I would like to give a down-to-earth introduction to the subject of the paper and to explain the problem it is attempting to solve.

I am working on design and implementation of a functional programming language with support for automatic differentiation. Automatic differentiation (AD) is a powerful technique for computing derivatives of functions given by programs in programming languages. Let us contrast AD with two other techniques for programmatically computing derivatives of functions.

First, there is numerical differentiation, which approximates the derivative of a function

by the Newton’s difference quotient

for a small value of

. The choice of a suitable

is a non-trivial problem because of the intricacies of floating point arithmetic. If

is too small, you are going to subtract two nearly equal numbers, which may cause extreme loss of accuracy. In fact, due to rounding errors, the difference in the numerator is going to be zero if

is small enough. On the other hand, if

is not sufficiently small, then the difference quotient is a bad estimate on the derivative.

Second, you are probably familiar with symbolic differentiation, which works by applying the rules for computing derivatives you have learned in your calculus course (sum rule, product rule, chain rule) and by using a table of derivatives of elementary functions: 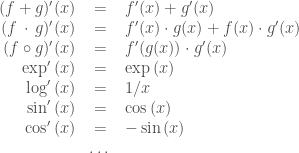 . Applying the product rule, we arrive at the expression for the derivative, which has size quadratic in

Evaluating it naively would result in evaluating each

times. A more sophisticated implementation may try, for example, to eliminate common subexpression before evaluation, but AD elegantly eliminates (hey, a pun!) the necessity of this step.

AD comes in several variations: forward mode, reverse mode, as well as mixtures thereof. I will only focus on forward mode AD here.

Forward mode AD makes use of dual numbers. Let us recall the definition. It resembles that of complex numbers, with the difference that dual numbers are obtained from real numbers by adjoining a symbol

with the property that

of dual numbers is the set of pairs of real numbers, each pair being written as a formal sum

. The arithmetic operations on dual numbers are defined by the formulas

(and similar formulas for subtraction and division).

We refer to the coefficients

as to the primal value and perturbation respectively. A dual number

can be thought as a small perturbation of the real number

, called the pushforward of

and defined by the formula

which is essentially the formal Taylor series of

truncated at degree 1. It follows from the properties of differentiation that the pushforward transform commutes with sum, product, and composition, as well as with subtraction and division.

OK, so here is the idea of forward mode AD: overload arithmetic operations and elementary mathematical functions to operate not only on real numbers but also on dual numbers. In particular, the extension of each basis function from real numbers to dual numbers is given by the pushforward of that function:

Here in the example I am using Haskell because it supports overloading and because I am more familiar with it. But the same trick can be performed in any language supporting overloading (e.g., Scheme or C++).

What overloading achieves is that any function built out of the overloaded primitives contains information about its own derivative. Any such function is generic: it can accept arguments of both types, real numbers as well as dual numbers. Effectively, any function in the program can compute two mathematically different functions: the primal function when given an argument that is a real number, and its pushforward when given an argument that is a dual number. This follows from the properties of pushforward.

This allows us to compute the derivative of

and extracting the coefficient in front of

and try it out in GHCi:

Many applications of AD require that derivative operators nest properly. In other words, we would like to be able to differentiate functions that internally differentiate some other functions, and get correct results! For example, you may want to use AD for bi-level optimization, when the values of the function you are optimizing are found as optima of some other function.

Let us look at the example:

Note that the inner function that is being differentiated depends on

, which is free in the body of the function, but is bound by the enclosing lambda.

It is easy to compute the correct answer: the inner function being differentiated is linear in

, and its derivative is

at any point, therefore the outer function becomes

On the other hand, what does our formalism produce? Let us compute. To visually distinguish between different invocations of

I am going to use braces of different shape: 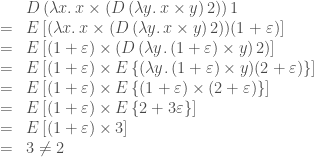 The root of this error, known as “perturbation confusion”, is our failure to distinguish between the perturbations introduced by the inner and outer invocations of

. There are ways to solve this problem, for instance by tagging perturbations with a fresh

is associated with which invocation of

. Nonetheless, I hope the example serves to illustrate the value and nontriviality of a clear semantics for a

-calculus with AD. In the paper I make some first steps towards tackling this problem.